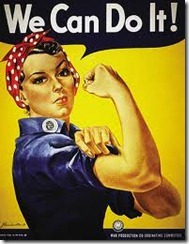 During World War II, an unprecedented number of women entered the workforce paving the way for future generations to take on new gendered roles. Though these women would earn less than half the wage of their male counterparts, women played an integral part in America’s successful war effort.

Today, Rosie the Riveter remains an iconic image. What you may not know is that apart from factory and home front service roles, women of this age were some of the first to take on official military duties:

One of the lesser-known roles women played in the war effort was provided by the Women’s Airforce Service Pilots, or WASPs. These women, each of whom had already obtained their pilot’s license prior to service, became the first women to fly American military aircraft. They ferried planes from factories to bases, transporting cargo and participating in simulation strafing and target missions, accumulating more than 60 million miles in flight distances and freeing thousands of male U.S. pilots for active duty in World War II. More than 1,000 WASPs served, and 38 of them lost their lives during the war. Considered civil service employees and without official military status, these fallen WASPs were granted no military honors or benefits, and it wasn’t until 1977 that the WASPs received full military status.