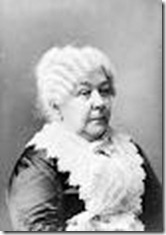 As Women’s History Month comes to a close, let us take this time to look back at one of the founding mothers of the women’s rights movement, Elizabeth Cady Stanton:

When Elizabeth Cady married abolitionist Henry Brewster Stanton in 1840, she’d already observed enough about the legal relationships between men and women to insist that the word obeybe dropped from the ceremony.

An active abolitionist herself, Elizabeth Cady Stanton was outraged when the World’s Anti-Slavery Convention in London, also in 1840, denied official standing to women delegates, includingLucretia Mott. In 1848, she and Mott called for a women’s rights convention to be held in Seneca Falls, New York. That convention, and theDeclaration of Sentiments written by Elizabeth Cady Stanton which was approved there, is credited with initiating the long struggle towards women’s rights and woman suffrage.

After 1851, Stanton worked in close partnership with Susan B. Anthony. Stanton often served as the writer and Anthony as the strategist in this effective working relationship.

In the years following the Civil War, Elizabeth Cady Stanton and Susan B. Anthony were among those who were determined to focus on female suffrage when only voting rights of freed males were addressed in Reconstruction. They founded the National Woman Suffrage Association and Stanton served as president…

While Elizabeth Cady Stanton is best known for her long contribution to the woman suffrage struggle, she was also active and effective in winning property rights for married women, equal guardianship of children, and liberalized divorce laws. These reforms made it possible for women to leave marriages that were abusive of the wife, the children, and the economic health of the family.