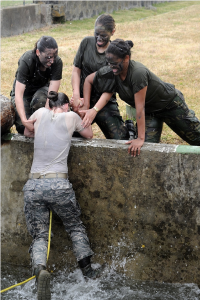 It’s been known that minorities such as women and the LGBT community have not always been welcomed with open arms into the military. In recent history, there has been a stigma surrounding these groups joining the military and fighting for the United States.  According to The Atlantic, women were not allowed to “serve in all front-line combat roles for the Army, Navy, Marine Corps, and Special Operations Command” until just two years ago.  And the LGBT community had their own obstacles, first to be allowed to serve in the military, and then the creation of the Don’t Ask, Don’t Tell (DADT) from 1993-2011, which created controversy and hardship for those affected.

However, it seems as though things are looking up for these two groups serving in the military. Below are two examples of how dignity and respect are portrayed by government officials and outstanding military women that are breaking barriers for our minorities.

Women in the Military

In the past two years, women have been making history and breaking glass ceilings in the military special forces. According to Defense One, “the U.S. Army’s 75th Ranger Regiment has become the first special operations unit to have a woman meet the standards of its selection course.”

In fact, not one, but two women graduated from Army Ranger school in December 2016. This is extremely significant because Army Ranger school is the most grueling, both mentally and physically, training course in the Army. Gayle Tzemach Lemmon, Defense One’s Council on Foreign Relations, explains Ranger school is an “intense combat leadership course through swamps and mountains.”

This achievement is also momentous because it is the first time a woman “earned a spot in the special operations forces.”  Although not every job in the military is opened to women yet, women have been making a difference in the forces for years. Lemmon explained that  “women soldiers joined Rangers on night raids, and searched and questioned Afghan women during raids to keep the women away from the combat operation then happening in their home.”

Although the process of merging women into the military and recently the special operation forces has been a long one, Lemmon said “women soldiers have proved their value to the mission and won acceptance as teammates as time went on.”

Another example of how a person or persons has shown dignity and respect in regards to integrating women and LGBT in the military is General James Mattis’s testimony at his confirmation hearing for Defense Secretary. Senator Elizabeth Gilliland asked him whether he believed LGBT people “undermined the military’s lethality” and Mattis responded by saying he wasn’t “concerned about two consenting adults and who they go to bed with.” Mattis continued by saying “my concern is the readiness of the force to fight and make certain it is the top of the game. When we go up against the enemy, the criteria that everything that we do in the military, up to that point, when we put the young men and women across the line of departure, is they are at the most lethal stance.”

This surprised many, including Senator Gilliland and Aaron Belkin, director of the Palm Center, who was elated to have heard Mattis’s answer. “When General Mattis agreed that women and LGBT troops can contribute to the military’s lethality, he was supporting the long-standing argument, backed up by a solid consensus in the research as well as the experiences of foreign militaries, that inclusive policy promotes readiness,” Belkin stated.

It’s encouraging to hear General Mattis’s respond with statements about LGBT in the military, in an environment that has, in the past, ignored or rejected gay rights issues.

To learn more about how your organization can implement dignity and respect on issues such as minority rights, check out our website and initiatives.