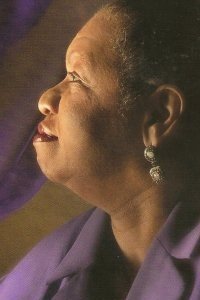 At first, Gwen Watkins wasn’t clear on why she should be collecting pet food donations for people who might not be feeding themselves.

People for Pets, a University of Pittsburgh program Watkins helps coordinate, does just that. And while Watkins may have struggled with the concept at the start– thinking it more important to feed the people themselves–4,000 pounds of pet food later, she has a different perspective.

“When you think about it, sometimes people will go out of their way to buy food for their pet, and they’ll go without,” Watkins said. “And why do they do that? That pet may be their source of companionship or their source of protection. You learn to care about the dignity of a personwho is in need and be respectful of them. And I think it’s an honor to be asked to do that.”

Watkins, who is the events coordinator for community service in Pitt’s Office of Community and Governmental Affairs, was named a Dignity & Respect Champion this month. In her work at Pitt, she develops partnerships with community food banks, clothing drives and other initiatives such as People for Pets, mobilizing more than 400 university volunteers. Even with such a large volunteer base, she always sees the need for an extra pair of hands.

“The projects that I’ve had the privilege and the opportunity to work with–I don’t just coordinate them. I physically go and do it,” Watkins said. “I can talk about people being hungry. But unless I actually go down to the Greater Pittsburgh Food Bank and serve, then I really don’t get an understanding of what people [are going through.]”

According to Anne Franks, a coworker who nominated Watkins, she works tirelessly for the good of the community. “She is dedicated to helping others who need support,” Franks said. “Gwen shows her care and respect for others in everything she does, and encourages us to do the same.”

Watkins has been at Pitt for nearly 42 years. A Pittsburgh native, she currently lives in Penn Hills. She credits her faith as the bedrock of her community sensibility.

“I really count it a privilege that God used me in any way to help people,” she said, “and I count it a joy, too.” Beyond privilege and joy, Watkins said helping others is also a duty, something she feels compelled to do as one among many.

“You can look away, if you want,” she said. “But when you don’t look away, and you look and really see the need that people have, it should do something to you. It should stir something up inside of us to help other people who are in need.”

Do you know an individual who makes a positive impact andpromotes an environment of inclusion? If so, nominate the person in your life you feel has made a difference for the Dignity & Respect Champion Award! This prestigious award recognizes people who are engaged in their communities, live by the principles of dignity and respect, and promote an environment of inclusion.