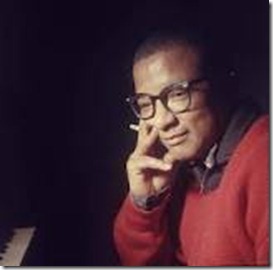 This week we join with Kelly-Strayhorn Theater in celebrating the posthumous birthday of founder and music great Billy Strayhorn:

This is the fourth year for the birthday celebration, which the theater started in 2008 as a tribute to Strayhorn. Both he and Gene Kelly’s birthday’s are celebrated yearly.

The former Regeant Theater was renamed the Kelly Strayhorn Theater in 2000 in honor of both Kelly and Strayhorn.

The evening promises to be beautiful as it will feature local and nationally known Jazz musicians including Roger Humpheries and a six-piece Jazz ensemble with three vocalists singing Strayhorn’s music; spoken word artist Leslie “Ezra” Smith will read a work that was commissioned for the occasion. Former Pittsburgh resident and Billy Strayhorn’s nephew, Dr. Greg Morris, will join in the celebration.

“We’re excited to have the program filled with Jazz artists and young artists,” said Solomon. “Ezra is an incredible young poet. People can expect an evening of great live music filled with classics.”

Billy Strayhorn was born in Dayton, Ohio, but his family moved to Pittsburgh’s Homewood section where he attended Westinghouse High School. His musical career began in the Golden Triangle when he studied music at the Pittsburgh Music Institute. Strayhorn met band leader Duke Ellington in 1939 after a performance in Pittsburgh. At that time, Strayhorn informed Ellington how he would have arranged one of Ellington’s songs. Strayhorn’s boldness enticed Ellington enough for him to invite his band to hear Strayhorn. Next, Ellington invited Strayhorn to New York and Strayhorn worked with Ellington for the next quarter century as an arranger, composer pianist and collaborator until Strayhorn’s death from cancer in 1967.

“It took me a while before I knew what kind of music he composed. But when he would come home to Pittsburgh, there would be a big celebration. When he got involved with Duke Ellington he sent me postcards from all over the world. I knew he was something special. I knew he was something very big. But I didn’t have a sense of how widely known he was and the music he made until after he died,” said Morris who now lives in Arizona.