Elsie Hillman, the 2013 National Dignity & Respect Champion, contributed leadership and support to advance the quality of life and equity for all citizens. Over the course of her life, she worked to involve more African American people in the leadership of civic organizations, while she joined the boards of traditionally African American organizations, such as the Urban League of Greater Pittsburgh.

She was fiercely committed to the advancement of women and was an early and active member of the Interfaith Alliance, which challenged bigotry, hatred, and intolerance. A leader in both local and national politics, she encouraged women to run for political office and supported their efforts. She also worked hard to increase the political participation of African Americans. 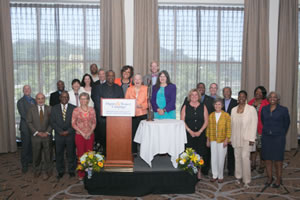 Elsie was at the forefront of advocacy for people with HIV/AIDS. In the early 80’s, when a man with HIV/AIDS was about to lose his home, Elsie sprang into action. When her efforts to persuade a church to purchase the house were unsuccessful, she purchased it herself so the man would have a place to live. The home became an early, informal hospice center for HIV/AIDS patients where they and their families were treated with dignity and respect. She met with patients and family members, dropping by with meals, encouraging words, and emotional support.

Through her active involvement and leadership, she gave others permission to do the same. Through her warmth, kindness, and passion for social, political, and economic justice, Elsie Hillman demonstrated a life-long commitment to create a more fair and equitable world for all people. In her blog, Gwen’s Take, Gwen Ifill, moderator and managing editor of “Washington Week” and co-anchor and managing editor of the “PBS News Hour” wrote about her 2014 visit with Elsie Hillman. Her words only reaffirmed our selection of Elsie Hillman as a National Dignity & Respect Champion. Learn more